No. 18 Colorado in must-win mode vs. USC 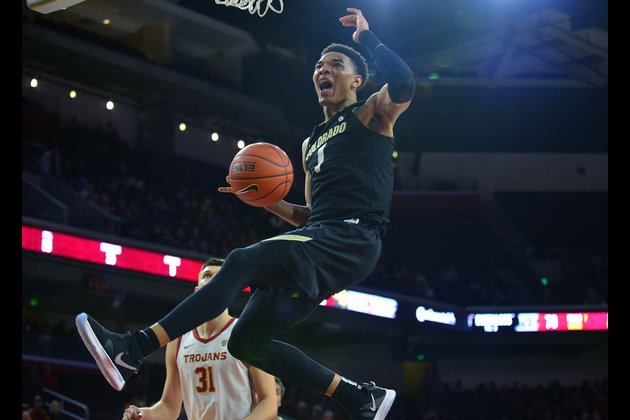 Colorado is one of six teams separated by one game in the Pac-12 race.

By coach Tad Boyle's count, that means the No. 18 Buffaloes need to win all five of their remaining regular-season games.

"They're must wins," Boyle told reporters. "If we want to compete for a league championship, they'reabsolute must wins."

Colorado looks to begin that task when it faces Southern California on Thursday in Boulder, Colo.

Colorado routed USC 78-57 on Feb. 1 in Los Angeles, or the roles would be reversed entering the rematch.

Then again, the Buffaloes could have been alone in first place, but they dropped a 68-60 decision at Oregon last Thursday night.

So no matter how it is viewed, there is plenty at stake.

"We have got smart guys, we have veteran guys," Boyle said. "They know what's on the line. They know what position we put ourselves in. They get it. You don't harp on it. You just say, 'Hey guys, let's have no regrets.' That's the biggest thing you want."

The Trojans are also in must-win mode, and their situation is complicated by a concussion suffered by star freshman big man Onyeka Okongwu.

Okongwu has missed the past two games, and his status is unclear for Thursday's game. He leads USC in scoring (16.4), rebounding (8.9) and blocked shots (3.0).

Freshman forward Isaiah Mobley has stepped up by averaging 9.5 points and 9.0 rebounds in the two contests. The Trojans won both games following a three-game slide, and Mobley sees more victories piling up down the stretch.

"Now we can get our minds ready for this road trip," Mobley said of an excursion that includes Sunday's game at Utah. "Obviously we want to win the Pac-12 and go to the (NCAA) Tournament. We have the talent and experience to do that and make a run."

Utomi has scored at least 15 points in three of the past four games and is averaging 16.8 during the stretch. The transfer from Akron had averaged 3.7 points in the previous three contests.

Senior guard Jonah Mathews (12.8 average) had just seven points against the Cougars after averaging 19 over the previous two games. Mathews has 236 career 3-pointers, third in school history behind Bennie Boatwright (243 from 2015-19) and leader Elijah Stewart (245 from 2014-18).

Bey has 10 double-doubles this season, including in three of the past four games. He had 21 points and 15 rebounds in last Saturday's 69-47 road win over Oregon State to raise his scoring average to 13.5. Bey leads the Buffaloes in rebounding (9.3), steals (39) and blocks (32).

Junior guard McKinley Wright IV recorded 13 points, 10 rebounds and six assists without a turnover against Oregon State for his fifth double-double of the season. Wright boasts team-best averages of 13.6 points and 5.2 assists.

Bey and Wright have led the way as Boyle recorded 20 wins for the seventh time in his 10-season tenure.

The Trojans are one victory away from reaching 20 for the fourth time in coach Andy Enfield's seven seasons. But that isn't the accomplishment he is worried about.

"We're a game out of first," Enfield told reporters. "We know how tough it is to go to the mountain schools. It's the toughest road trip in the Pac-12."