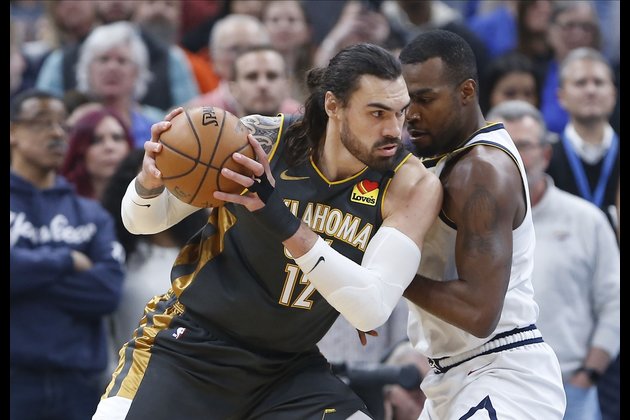 Chris Paul made four 3-pointers as part of a 29-point outing to lead the Oklahoma City Thunder to a 113-101 victory over the visiting Denver Nuggets on Friday night.

Steven Adams recorded 19 points, 17 rebounds and matched his season best of four steals as Oklahoma City won for the 11th time in the past 14 games. Danilo Gallinari added 15 points, and Shai Gilgeous-Alexander contributed 11 points, nine rebounds and nine assists as the Thunder halted a seven-game losing streak when facing the Nuggets.

The Nuggets were hurt by 19 turnovers and 6 of 27 shooting from behind the arc. Denver shot 48.1 percent overall.

Luguentz Dort and Dennis Schroder also scored 11 points apiece, and Nerlens Noel added 10 for Oklahoma City, which shot 46 percent from the field, including 9 of 26 from 3-point range.

Paul scored 20 of his points in the second half when the Thunder rolled up 65 points.

Oklahoma City led by one entering the fourth quarter and opened with a 9-2 burst. Abdel Nader buried a 3-pointer to culminate that surge and give the Thunder an 87-79 lead with 9:54 left.

A dunk by Noel increased the advantage to 95-85 with 7:15 remaining. Denver rattled off the next seven points to pull within three on Jokic's dunk with 5:31 left.

Paul later rebounded his own miss to score and give Oklahoma City a 105-97 lead with 2:59 left. Paul knocked down a 12-foot jumper 31 seconds later, and Adams delivered a thunderous dunk to make it a 12-point margin with 1:58 remaining.

The Nuggets were unable to make one last charge.

Jokic had 19 points in a first half, which concluded with the teams tied at 48.

Paul capped a 12-1 burst to start the second half with a 3-pointer, but Denver responded with 10 straight points to pull within 60-59 with 6:50 left in the third quarter.

Paul's three-point play gave Oklahoma City a 72-65 advantage with 4:05 left in the third quarter, before the Nuggets trimmed their deficit to 78-77 entering the final stanza.