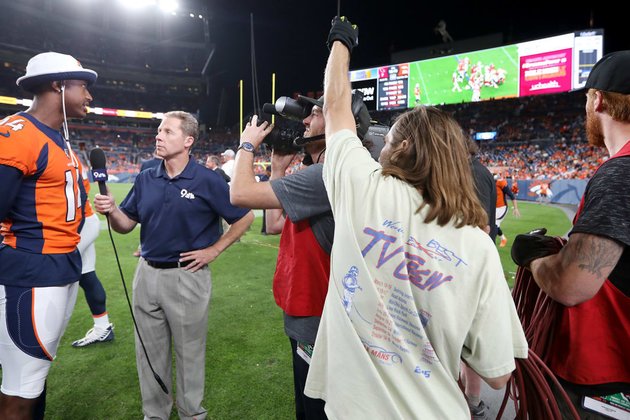 ENGLEWOOD, Colo. - The Denver Broncos agreed to a multi-year extension with 9NEWS as the club's hometown television partner, the team announced on Wednesday.

"We are excited to extend our broadcast partnership with 9NEWS," Broncos Chief Commercial Officer Mac Freeman said. "9NEWS has consistently delivered our fans a top-shelf broadcast for Broncos preseason games and will continue to provide fans with exclusive programming about the team."

9NEWS, which has served as the Broncos' flagship television station since 2011, will air all three of the club's preseason games. In addition, 9NEWS will continue to produce unique local programming such as "Broncos Huddle with Coach Nathaniel Hackett," "Game Day Live," "Broncos Tonight," "Broncos Sideline Stories with Jim Saccomano" and quarterly Broncos specials.

"What a tremendously exciting day for all of us at 9NEWS," Mark Cornetta, 9NEWS President and General Manager, said. "To have the Broncos continuing their partnership and relationship with 9NEWS is amazing. A new coach with a new team presents a number of unique and innovative programming opportunities. The 9NEWS sports staff, including Rod Mackey and Broncos Insider Mike Klis along with Jacob Tobey, Arielle Orsuto and Scotty Gange, will put fans in the locker room, in the huddle and on the 50-yard line with award-winning stories. We're all looking forward to working with the Denver Broncos and their organization to give Broncos Country and the people of Colorado the best coverage in more places than ever before."

Along with carrying all three of Denver's preseason contests (vs. Dallas, Saturday, Aug. 13; at Buffalo, Saturday, Aug. 20; vs. Minnesota, Saturday, Aug. 27), 9NEWS is scheduled to air two regular-season Broncos games as national broadcasts: a pair of "Sunday Night Football" matchups (vs. San Francisco, 9/25; vs. Kansas City, 12/11).

More information regarding Broncos programming on 9NEWS will be released as soon as it's finalized.

OTTAWA, Ontario: Military trainers from Canada will head to the United Kingdom to teach Ukrainians new techniques for fighting the ...